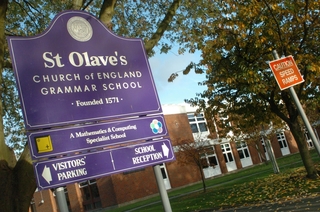 The policy at St Olave's school in London from 2010 to 2017 meant pupils were treated as "collateral damage", the Bromley council report said. Excluding pupils "based on academic ability" breaches the Education Act.

Interestingly, the headmaster who oversaw the policy said he did not know it was illegal. The good news is that the school has fully accepted the findings.

Christine Whatford CBE, who conducted the inquiry, said pupils were threatened with exclusion despite suffering depression, anxiety or trauma. One member of staff said a student was so fearful of telling his parents about his exclusion "that he might as well kill himself", while others described scenes of "distraught pupils crying in the car park".

Headmaster Aydin Önaç who resigned from the Orpington school at the end of 2017, told the inquiry that "no one ever told him [the policy] was illegal and that many other schools do it". But it was his responsibility to know, Ms Whatford wrote, adding government guidance sent to schools stated it was not permitted. She also said the illegality of it should have been "picked up" by Bromley Council, which said it fully accepts the report it had commissioned.

The Department for Education wrote to all secondary schools in September 2017 reminding them that "it is illegal for schools to exclude pupils based on academic ability", which is contrary to regulations set out under the Education Act.

Ms Whatford has urged the school to apologise to parents and pupils affected by the exclusion policy.

The school said in a statement it has worked with parents, carers, staff and students to make key improvements. "We know there is still work to be done and so we will continue to work with you, the borough and the Diocese of Rochester as we seek to address any remaining actions."

Ms Whatford also asked the people behind St Olave's Unofficial News, a website "highly critical" of Mr Önaç, to close down the site for it "will remain a symbol of the divisions and tensions". But a spokesperson for the site said its visitors want it to stay online "as a historical record of how an 'outstanding school' can be failing its staff and students".